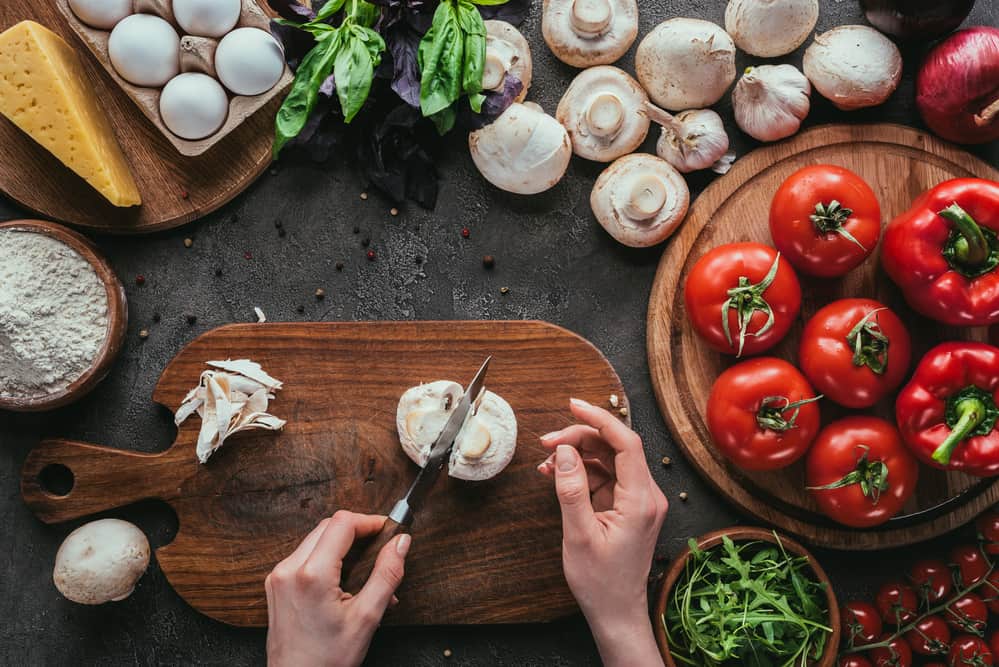 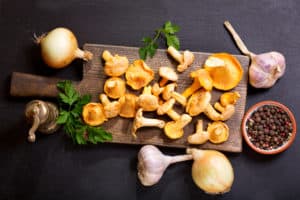 Mushrooms are a nutritious and delicious culinary addition. Most folks are only familiar with the common white button mushroom, portabellos, and possibly shiitake mushrooms.

The realm of edible mushrooms goes far beyond this, though. And, each one deserves its’ own culinary treatment. Oyster, Shiitake, Lion’s Mane, Morels, Enoki, Chicken of the Woods, and Maitake mushrooms are all fantastic eating!

Should Mushrooms Be Cooked Before Eating?

This is complicated, varies by mushroom, and by who you ask. All mushrooms have tough cell walls, making them difficult for the human body to digest.

Cooking them before eating is best for easier digestion. Regardless of safety, cooked mushrooms are actually healthier. The cooking process releases nutrients that might otherwise be difficult to absorb. 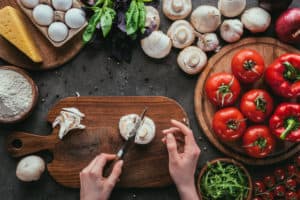 White and crimini (also called baby bellos) button mushrooms are commonly eaten raw. But should they? The debate is due to the pretense of a toxin, agaritine, which is thought to cause cancer.

This toxin is only in Agaricus sp. mushrooms, which includes button mushrooms, crimini, and portabellos.

The problem is, there isn’t a lot of human-based studies around it. Research does show, though, that agaritine breaks down with storage and exposure to air. It also breaks down during cooking. So, eating raw button mushrooms is likely just fine. If you’re worried, though, it never hurts to err on the side of caution!

Most importantly, never eat a mushroom that is not identified 100 percent! If the mushroom is an edible species, it should be cooked before consumption, so it is easier to digest.

All wild mushrooms should be eaten in limited amounts the first time, regardless of whether it is edible or not. This is important because wild mushrooms are not a standard part of our diets, and an individual may have an adverse reaction. For example, some people report gastrointestinal distress after consuming Chicken of the Woods.

Others deem it one of the best edible mushrooms available. A lot depends on the individual. Always eat mushrooms with caution until you know how you will react.

These mushrooms have thick, meaty caps that hold up well during cooking. They have a light, slightly fruity, anise-like flavor. Oyster mushrooms are especially wonderful fried. They also work great as a meat replacement in dishes, sauteed, baked, and roasted.

Shiitakes possess a fragrant, earthy, umami flavor. They are dense and velvety when cooked, and hold up well during the cooking process. Shiitake are most often stir-fried, yet they are also excellent sauteed and fried, used in soups, and added to pasta sauce. Shiitakes are also widely available dried and possess a stronger flavor in this form.

This unique mushroom is touted for its crab-like taste and texture. It is quite uncanny, really. Lion’s Mane has a mildly sweet yet savory flavor and dense, flaky meatiness. The cooked mushroom pulls apart easily, much like fish, and is often shredded to make faux crab cakes.

The high water content in this mushroom makes it a bit spongy in texture. Press all the water out, and it will absorb loads of sauce and flavor. 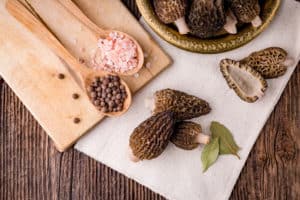 These elusive and quite expensive gems are sought after by renowned chefs world-wide. There’s a good reason, besides their exclusiveness. Morels taste divine! Their flavor is earthy, nutty, and uniquely vibrant. Their flavor is easily overwhelmed by heavy sauces or inclusion in overly complicated dishes.

Morels benefit from a light, simple treatment. Frying them whole in butter is the preferred method of most. It is enough. They are also excellent stuffed, cooked with wine, or with a very light cream sauce. 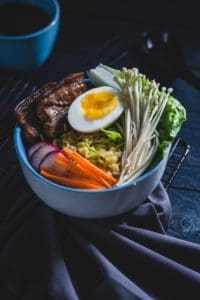 This long, skinny mushroom is unique in more ways than one. Most significantly, the cultivated version is vastly different than the wild one. A favorite in Asian cooking, Enoki is used in soups, stew, salads, and is often stir-fried or sauteed. The taste is subtle, a bit like radishes, with an earthy twist.

Cooking with Chicken of the Woods

This dense, meaty mushroom has a texture very similar to chicken, the animal, hence it’s common name. It has mild, juicy taste and tender texture. Chicken of the woods is excellent fried, sauteed, and baked.

Chicken of the Woods Recipes

Chicken Fried Chicken of the Woods

Drunken Chicken of the Woods

Grilled Chicken of the Woods Sandwich

Cream of Chicken of the Woods Soup

Chicken of the Woods Soup

Cooking with Maitake (Hen of the Woods)

A little spicy, very meaty, with an earthy undertone, Maitake mushrooms are versatile and tasty. These are the “steaks” of the mushroom world. Like steak, the flavor benefits from rich herbs like rosemary, thyme combined with a simple preparation.

Grilled Hen of the Woods

Roasted Hen of the Woods

Hen of the Woods Gravy

Hen of the Woods Soup