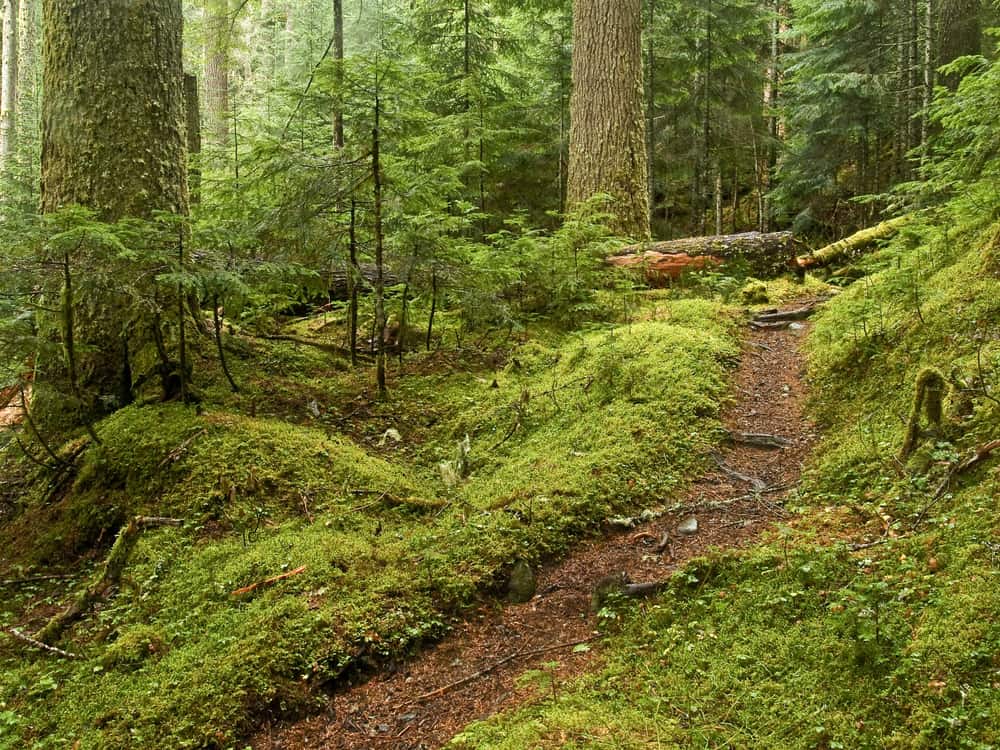 Trees and Fungi: Their Secret Partnership 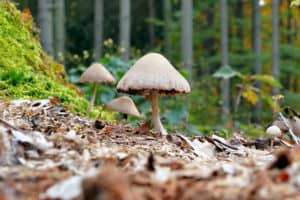 Trees definitely might be the rock star(s) of the forest, but they co-exist with smaller plant life and organisms.  These little organisms, fungi and mushrooms, are valuable and can demand a high price at market.

What is the importance of the relationship between trees and mycorrhiza (a “symbiotic association between a fungus and a plant,” Wikipedia, nd.)?  How do trees and fungi benefit respectively and how do they interact together?  Let’s take a deeper look!

Benefits for the Trees

“Because the relationship between trees and mycorrhizae is symbiotic, both the tree and the fungi extract some benefit. Mycorrhizae are more effective than tree roots at accumulating water and nutrients, and can store excess nutrients, releasing them to the tree as needed. The fungi also inhibit invasion by damaging fungi, and extend the life to root tips.

Mycorrhizae release acids that break down substances that the plant cannot use without this help, and fix nitrogen from both the soils and atmosphere so that it is more available to the tree. Mycorrhizal fungi produce hormones that encourage the production of new root tips, which aids both the tree and the fungi” (Norris, n.d.).

Trees supply the perfect growing environment for fungi.  Specific climate, soil and tree species creates a rich situation for each different species of mushrooms to flourish.  Trees and mushrooms “have constructed a close relationship with the passing of the ages.  Fungi like to grow between the roots of trees and the arrangement is beneficial to both partners” (terradaily, 2008).

“The symbiotic relationship of the fungus and the tree root systems is advantageous to both. The fungus facilitates the uptake of scarce nutrients such as phosphates and nitrogen and protects the roots against parasites in the soil. In return they are able to draw on the sugars in the roots. 85% of all plants and trees are dependent on symbiotic processes of this kind for their growth” (terradaily, 2008). 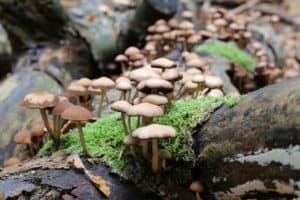 “The symbiotic relationship between mycorrhizae and trees benefits the fungi as well. Fungi cannot manufacture their own food due to lack of chlorophyll, a process that converts sunlight to energy used for producing sugars. Therefore, fungi must get this food from chlorophyll-producing plants. They do so by either penetrating the plant roots or forming a sheath around the root tips. This energy allows the fungi to reproduce and form large networks within the soils” (Norris, n.d.).

Different mushrooms grow under different types of trees.  Climate and soil also play a part in creating a sustainable environment for the fungi to flourish.  Knowing which forest is suitable for specific species of mushrooms is important for proper identification and a successful hunt.

“Most wild edible mushrooms are mycorrhizal that means they build symbiotic associations with the roots of ectomycorrhizal trees and shrubs. Due to the mushrooms’ lack the chlorophyll, they are not able to obtain energy from the sun and synthesize carbohydrates (sugars). Instead of this, fungi use their underground networks of hyphae to receive sugar and other nutrition from the trees. In return, plants obtain minerals and water from the soil through these networks” (oregondiscovery, n.d.).

Here in the Pacific Northwest, you’ll find several types of trees including:

When and Where to Hunt for Your Mushrooms

There is no beginning or end to mushroom foraging. The vastness of the mushroom kingdom means that species are growing all year-round. The majority grow in spring, summer and fall, but there are still types out there growing in the middle of winter. To know when to forage, you need to study the specific mushrooms species as they each have their own preferred fruiting schedule. 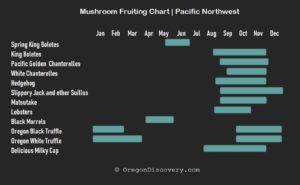 The foraging seasons are also based on Mother Nature. An overly rainy or overly dry spring will affect the entire mushroom kingdom. This makes it challenging to determine exactly when is the best time to forage. It all depends on the weather. A mushroom forager quickly becomes obsessed with all things weather-related! It is not an exact science, and accurate timing takes a lifetime to learn because it is always changing. Keep notes year to year, tracking weather conditions and mushroom finds.