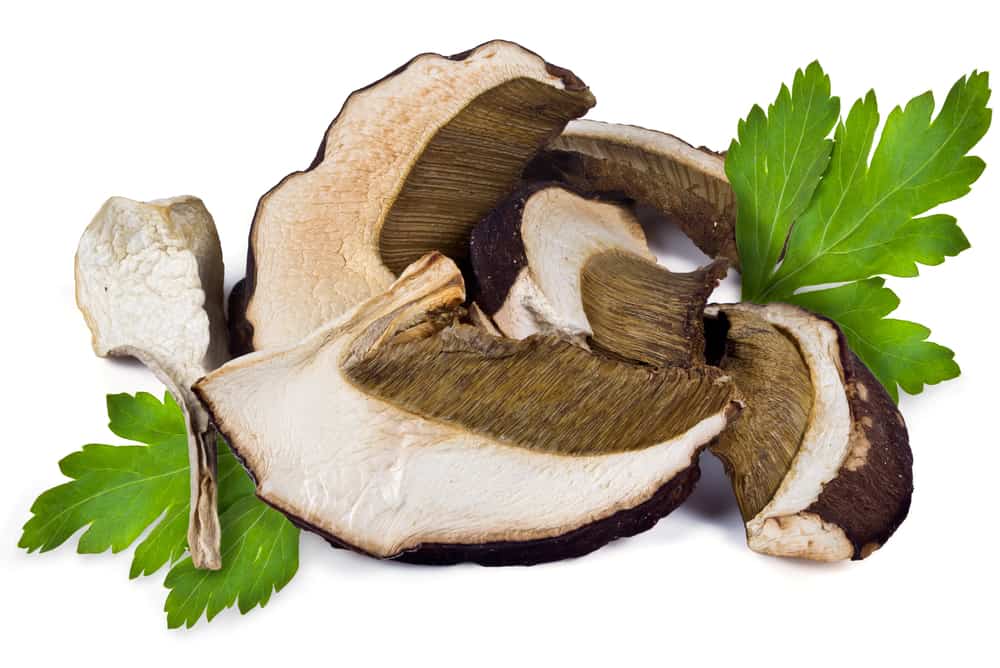 The Royal Porcini, King of the Mushroom Kingdom

Perhaps no mushroom is more deserving of such a royal title as the King Bolete (Boletus edulis), or porcini as it is commonly called. With a texture and taste beyond compare, these elusive treasures are worth taking the effort to hunt.

Their season is short, susceptible to climate and cold, and rain. And, as if that isn’t challenging enough, getting to these precious mushrooms before the bugs do is an almost impossible task. Those insects know good eats!

The name porcini is applied to several bolete species that are exceptional eating. To learn about others besides the king bolete, see the look-a-likes section. 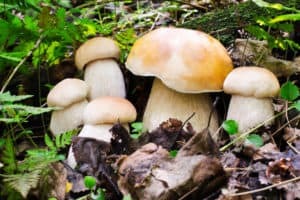 What’s so great about porcini?

It’s all about the umami, and porcini holds this in droves. Their texture is dense, meaty, smooth, and creamy. The flavor is hearty, with nutty, woodsy undertones.

This is one of those foods that can only be truly appreciated once tasted. If you’ve never had one, you’re in for a treat. If you’ve eaten porcini, you know the wonder of this delicacy.

These stout mushrooms grow singly in clusters. Often, if you see one, there are others nearby. Look under hemlocks, firs, spruce, and pines in early summer through late fall. On the western coast of the United States, they are also found in oak and coastal forests.

They come up after rain, so pay attention to the weather. Give them a couple of days, then hit the woods. These gems are known to fruit at varying times throughout the year, so always keep your eye out for them, especially after heavy rainfall.

Porcini, the King, must be harvested when young. Bugs are relentless and love eating these mushrooms, as do slugs, squirrels, and mice. The competition for porcini is intense! All too often, even after finding a patch, there are none worth foraging due to legions of holes and bites.

Don’t fret, though. Mark the spot and get there earlier next year. Porcini fruit in the same location for years. 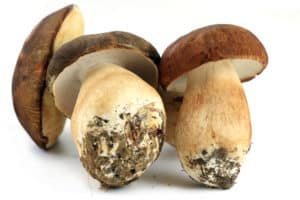 Porcini belongs to the bolete family, which means they don’t have gills like classic button mushrooms. Instead, their underside is smooth and flat, white when young but then yellowish as it matures.

The cap is buttery-brown, dense, and large, and it ranges from 3-11 inches across. Porcini stems are white and range between 3-9 inches tall and can be up to 3 inches wide.

The stems are sometimes tall and sometimes squat, but always on the top portion, there is reticulation, or what looks like spider-web white markings around the width of the stalk.

No parts of this specimen stain when handled or bruised.

The inside flesh is white and firm, though, as mentioned above, once the bugs take over, this changes. Cutting open the porcini lengthwise is a necessity to determine its edibility.

There are often long, brown tunnels inside from stem to cap where bugs have invaded. Any specimens that are soft, spongy, or beginning to rot should be left.

There are many look-a-likes, and some are as delicious as the porcini, while others are bitter, and still, others are toxic.

Keep an eye out for this one; it is a choice edible. It generally appears before boletus edulis, fruiting around the time morel season ends. A fantastic hunt is finding morels and spring king on the same day! The spring king has a reddish-brown cap, as opposed to the king bolete, which has a tannish-brown cap.

Another fine-tasting bolete, this one is distinguished from the king bolete by its deep orangish-red cap. Also, it grows with aspen trees, not conifers.

Similar coloring and shape make this one a little difficult to differentiate. It’s smaller than the king bolete, has a yellow underside, and is generally found with oak trees. It is another good edible mushroom.

Another delicious look-a-like, the queen grows in the southwest United States.

A direct relation, the California king, is a porcini of epic proportions. It looks the same, except the cap can be up to 20 inches across.

This tricky look-a-like has fooled many. As soon as you taste it, though, you’ll know. If unsure, take a small piece and chew it (then spit it out); the bitterness is instantly apparent.

This poisonous bolete looks similar but has a red stem and stains blue when bruised.

The best way to enjoy porcini mushrooms is to saute them in butter, maybe some garlic, if you like, and eat them on their own. The firm, creamy flesh is a delicacy to be savored. Porcini are also excellent as a meat substitute in soups and stews, in risotto, combined with a creamy pasta sauce, and grilled.